unicorn
ˈjuːnɪkɔːn/
noun
“a mythical river fish typically represented as a large predatory brown trout with a big kype and an aggressive attitude.“

Last Wednesday evening, I made a quick dash from Dublin to Navan anglers stretch on the River Boyne.  I always enjoy travelling to the river with the anticipation of finding a magic days fishing where big wild trout throw caution to the wind. Those opportunities can be rare…it’s a bit like unicorn hunting!

I arrived at the river to find reasonable fishing conditions as there had been a small rise in height following recent rain but after an hour or two, I had covered a number of pools without any sign of fish.

Targeting larger trout in the river with streamers can be a fruitless pursuit and my mind began to wander a little from the fishing. I had almost resigned myself to another one of those blank days, when a fish moved to the fly and snapped me out of my daydream. I cursed to myself thinking that I had missed the chance.

It is very rare in my experience to move a big brown trout twice in quick succession but that doesn’t mean it’s not worth trying. I made a few more casts to the general area with no response. I was almost out of ideas when I cast the fly above where he had shown and made a big downstream mend so that the fly ran head first downstream alongside where the fish had showed. One strip and the fish hit the fly aggressively and took off downstream with fly firmly attached. I knew immediately that it was an exceptional fish. Sometimes the fight from a big river trout can be disappointing but on this occasion the fish went absolutely berserk running downstream.

At this time of year there is a lot of weed in the river and I have lost a number of good fish as a result of them burying their heads and leaving the fly attached to weed. I jumped into the river and made an attempt to follow the fish, I soon realised that it wasn’t going to be possible go after him due to the water height. I applied as much pressure as I could in order to bring it back across and upstream to me. After a short tussle, I lifted the net on the fish and let out a roar of victory! It weighed 7lbs 4oz and measured 27.2 inches long. For a resident brown trout in a river in Ireland this is a fantastic fish and I am delighted to have been lucky enough to catch it.

Amazingly, my friend Ciaran O’Kelly (who’s developed a serious streamer problem) from Kells caught this same fish in May and he weighed the fish at 7lbs 10 oz. Since I first divulged my streamer madness to Ciaran a number of years ago, He has spent a huge amount of time developing and fine tuning tactics for big trout in Ireland. We share plenty of ideas and some victories and failures, So we had a good laugh when I told him I’d poached his fish!

The capture was bitter sweet as unfortunately the fish died, despite spending a considerable amount of time trying to revive him. Scale samples have been sent to Inland fisheries for DNA analysis. Hopefully this will yield some interesting information about the fish.
One could say that it is the fish of a lifetime but I hope not as a 30 inch plus trout from an Irish river is certainly a possibility. 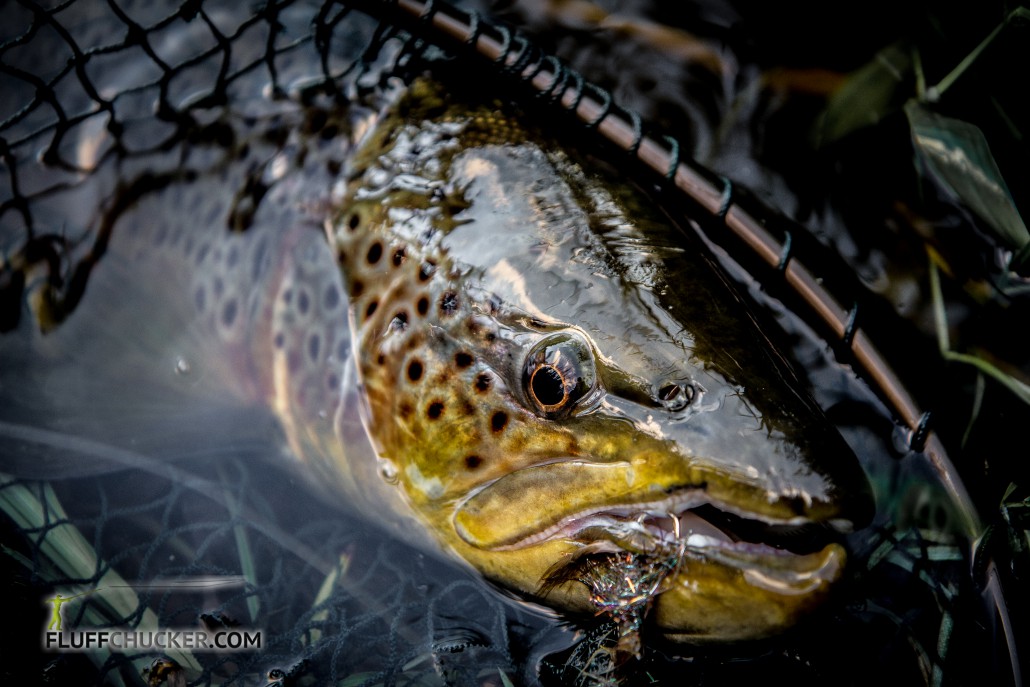 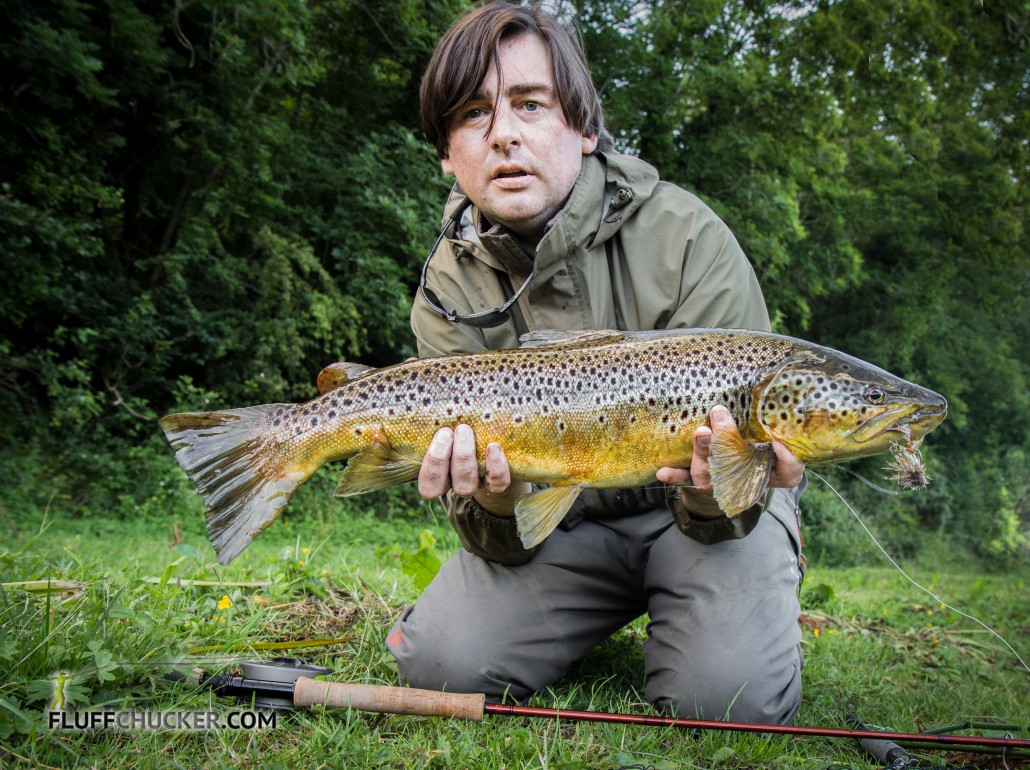 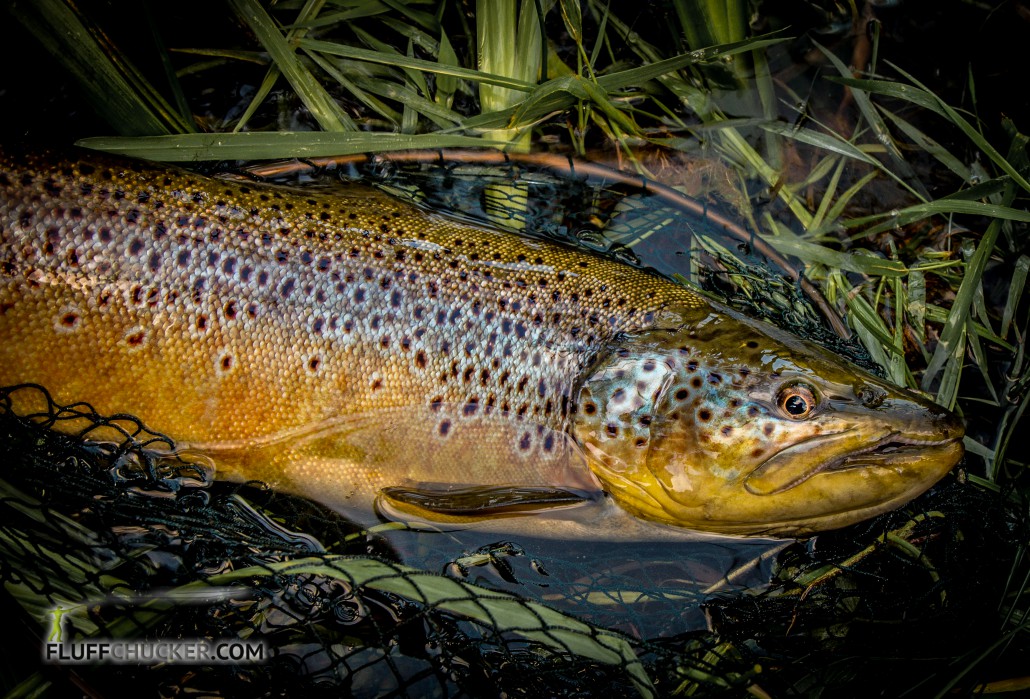 Fly fishing for trout on the bigger east coast rivers remains very difficult. You’d nearly get a pull of a Springer quicker! We got a couple of nice fish on Sunday but that was a result of hard work. The water tempurature is rising slowly but is still low for the time of year. I think I’ll head for some smaller rivers as I’m in need a bumper day at this stage! 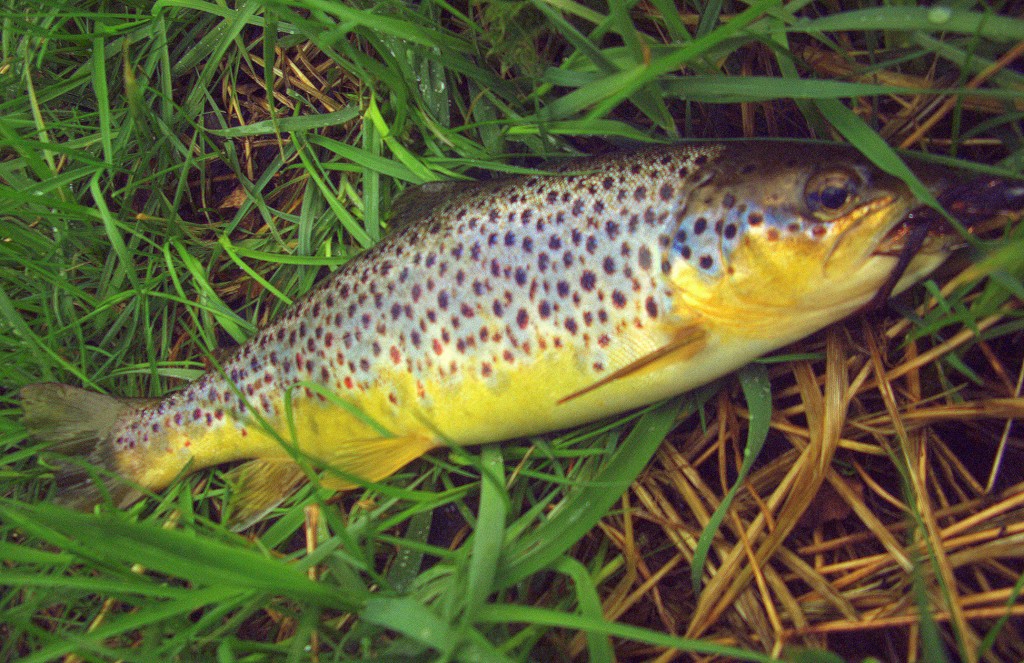 We were faced with challenging conditions due to this unrelenting east wind.

The fish were reluctant to move to our flies and we managed to get Jose into some better than average trout even though a couple fell off!

Jose was very impressed by the quality of our brown trout and the variety and beauty of the water available to the flyfisherman so close to Dublin. 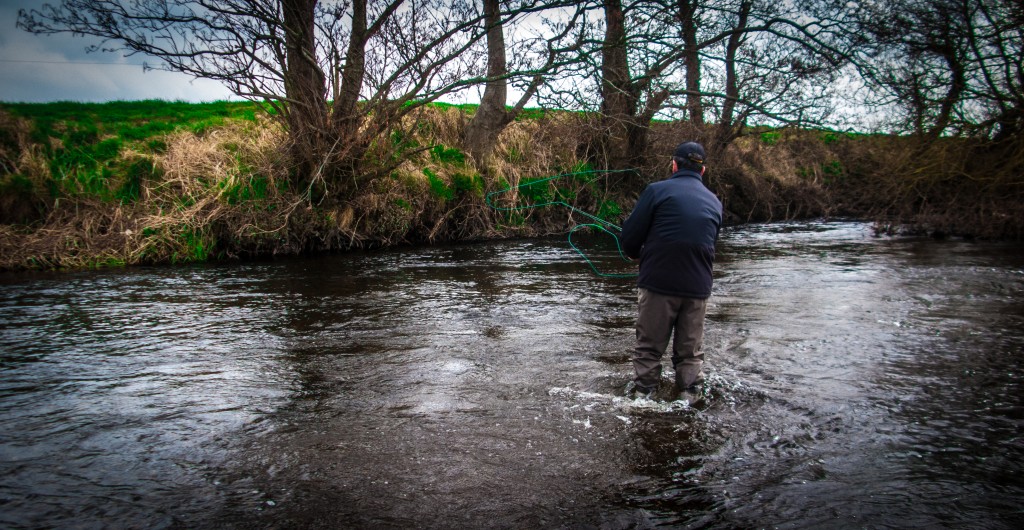 I had a great end to my fishing season with a bumper day for big river trout. The smallest was 19 inches. The fish were released safely and of course…..I lost the biggest one! 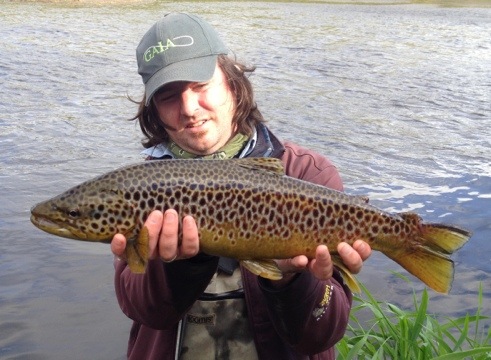 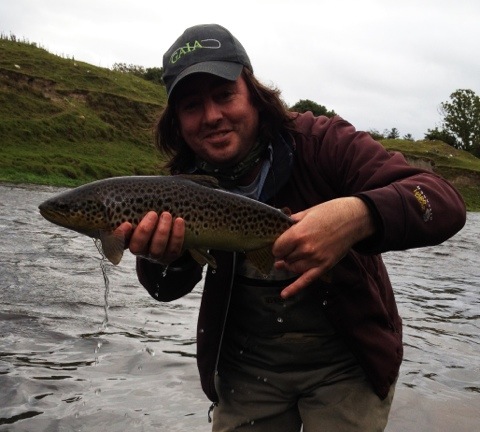 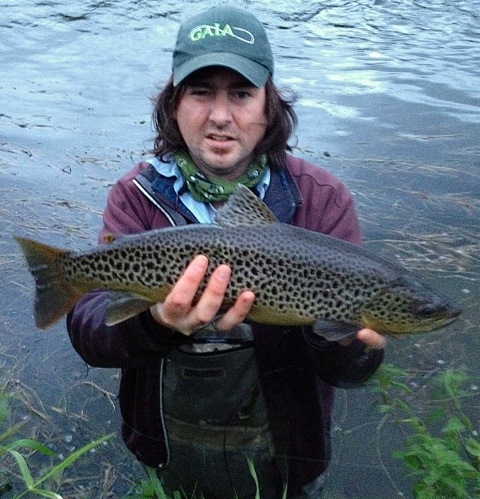 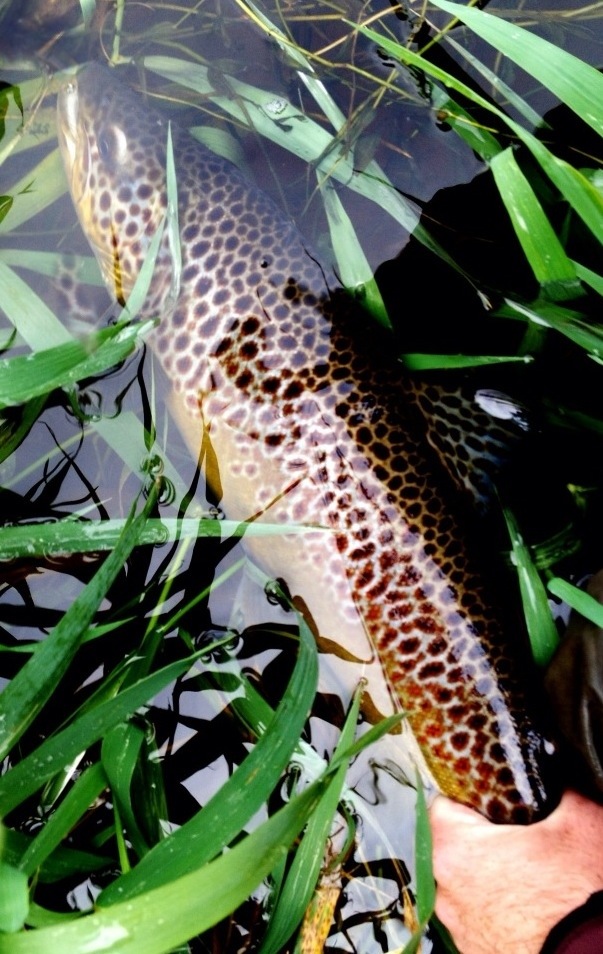 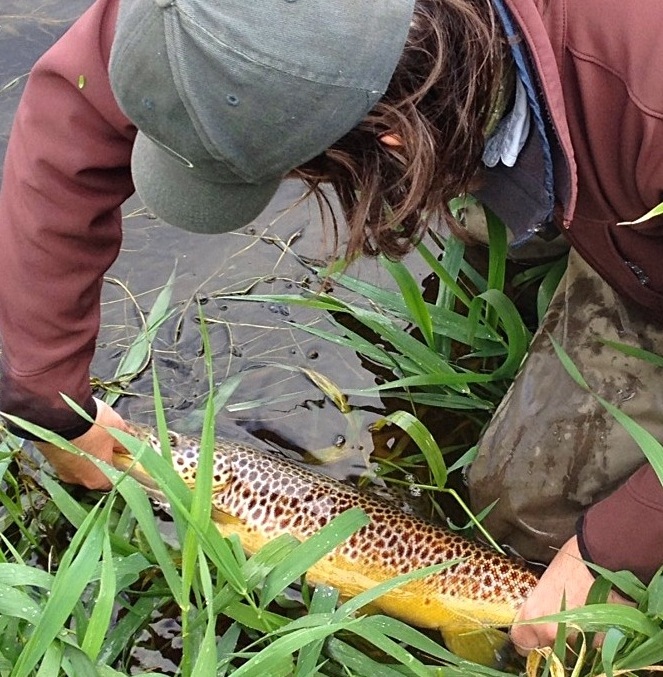 I spent the day on the Boyne guiding Rob Kurz from Philadephia yesterday. The Trout fishing was very poor but Rob got a nice surprise when he hooked a big Salmon on a trout rod while prospecting the head of a fast run. Rob is a very experienced angler with many large Sailfish and other blue water species on fly tackle to his credit. 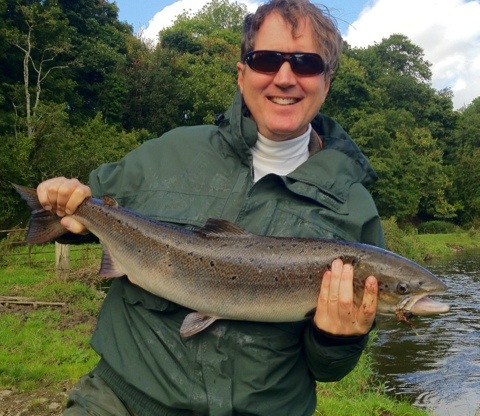 He got a serious run for his money from the well rested Salmon but managed to get the fish quickly to the bank where we took some quick pictures.
The fish was of course released and swam away none the worse for its battle. Congratulations on your first Atlantic Salmon Rob!! 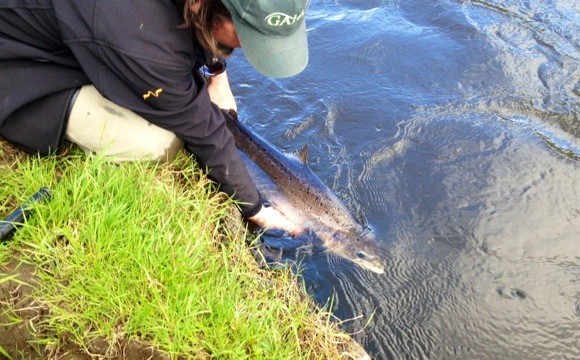 I hooked this fish yesterday literally on my last cast of the day after 13 hours of meticulously combing the water for a big trout. A great reward for hard work! 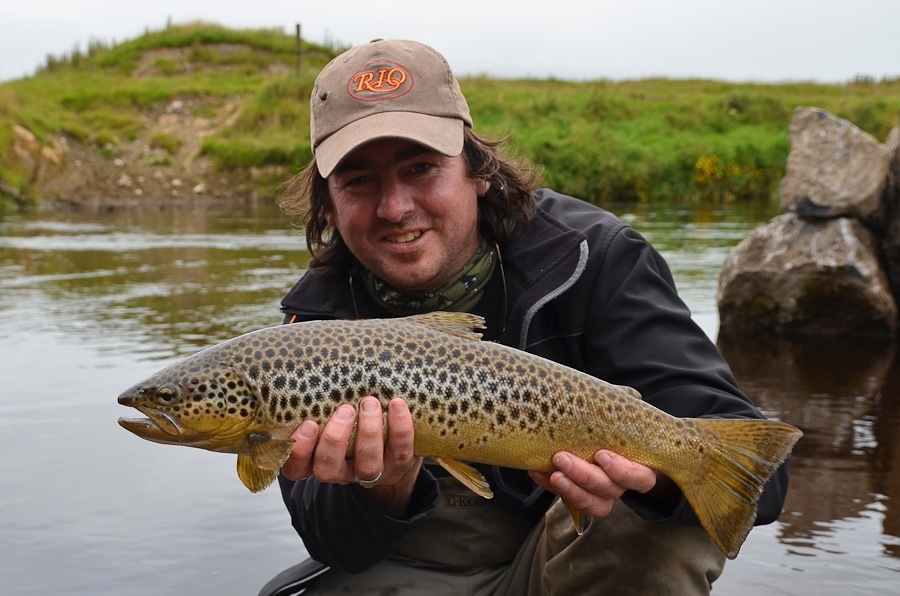 You can’t beat the old Gilleen! I saw this fish take  just under the surface and he gave me a great scrap. Roll on Saturday I have Salmon fever at the moment!! 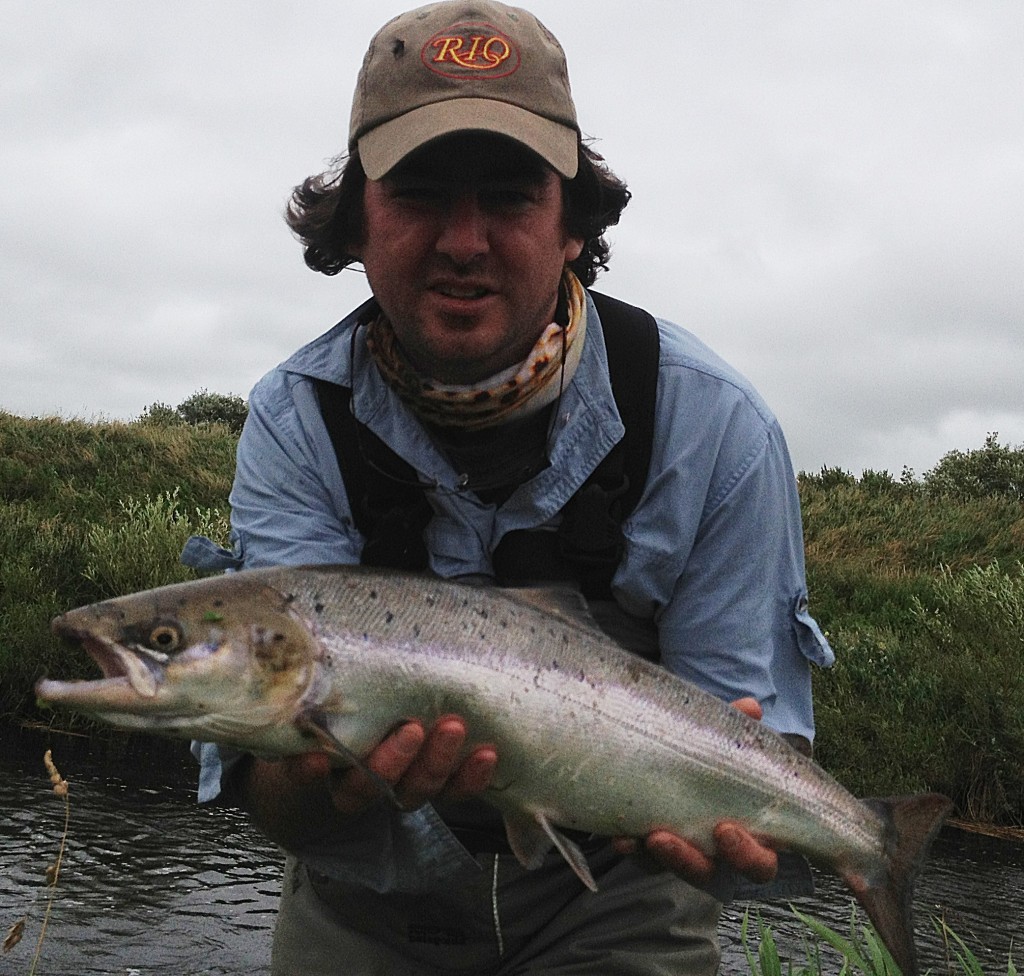 I got this thug today on a nymph. He gave me a serious scrap that included a 50 meter sprint down the river bank to catch up with him. As always the fish was released unharmed 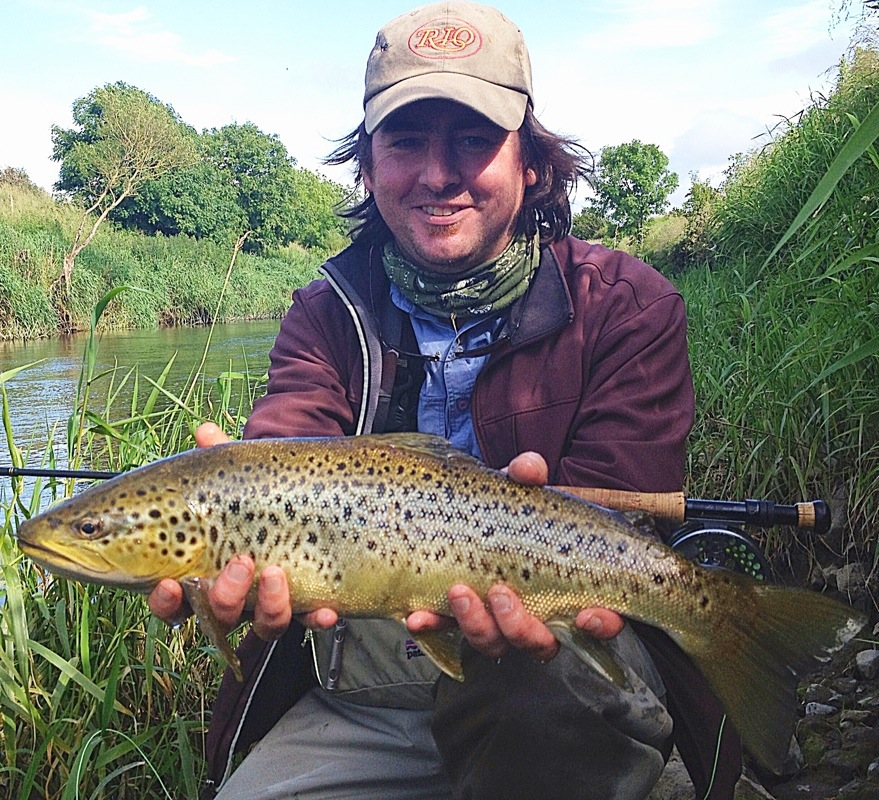 I had some nice fishing with clients and friends last week over two evenings on a couple of east coast rivers. All fish were on a single handed rod. 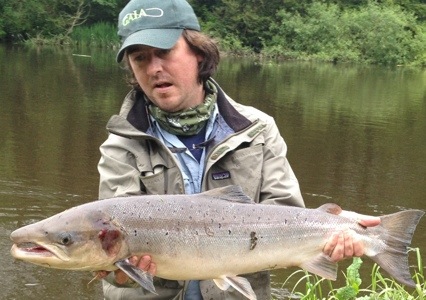 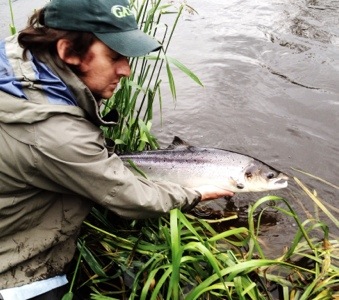 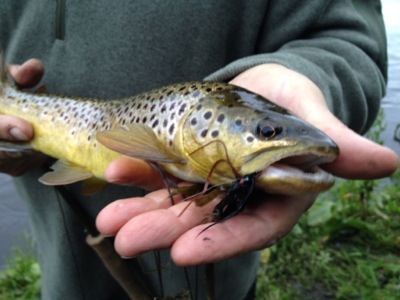 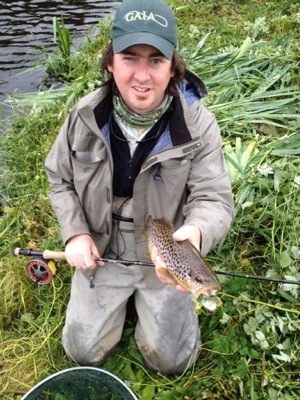 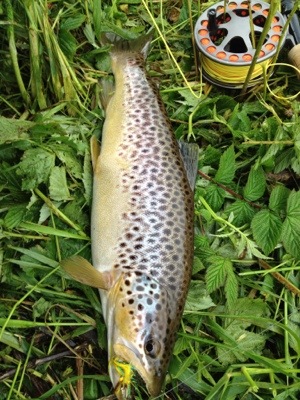 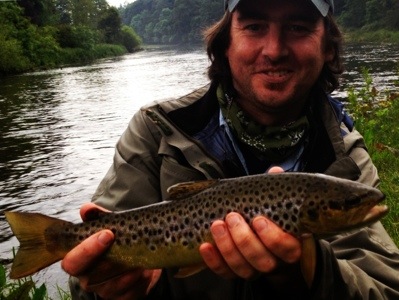 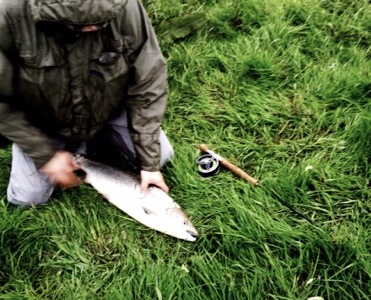 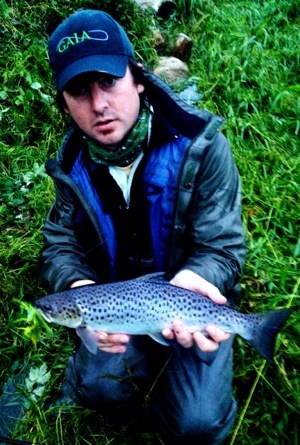 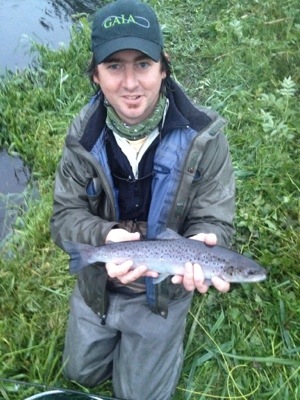 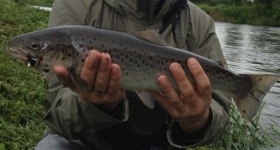